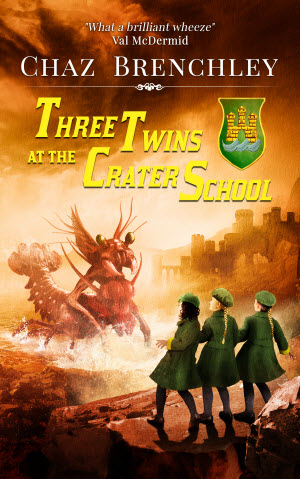 Mars, the Red Planet, farthest flung outpost of the British Empire. Under the benevolent reign of the Empress Eternal, commerce and culture are flourishing along the banks of the great canals, and around the shores of the crater lakes. But this brave new world is not as safe as it might seem. The Russians, unhappy that Venus has proved far less hospitable, covet Britain’s colony. And the Martian creatures, while not as intelligent and malevolent as HG Wells had predicted, are certainly dangerous to the unwary.

What, then, of the young girls of the Martian colony? Their brothers might be sent to Earth for education at Eton and Oxbridge, but girls are made of sterner stuff. Be it unreasonable parents, Russian spies, or the deadly Martian wildlife, no challenge is beyond the resourceful girls of the Crater School.

“All the earnest charm of a British boarding school story, plus aliens! I wish I were a Crater School girl.” — Marie Brennan

“Three Twins at the Crater School is splendidly full of peril and charm. It calls forth very particular memories of books and mountain schools and the adventures of teenage girls.” — Gillian Polack

“In a past that isn’t ours, in a world of aether ships and an Eternal Empress, the Crater School embodies all the values, passions, high jinks and adventures of the classic girl school stories of the first half of the twentieth century. For every fan of The Chalet School, Malory Towers, Dimsie or the Abbey Girls, this is a guiltless pleasure.” — Farah Mendlesohn

“The British Empire has met its match in Chaz Brenchley’s Mars. Mysterious aquatic aliens have transported humans to the Red Planet by means unexplained, and the Brits, willingly taking on the colonizing of this new world, establish themselves well. The Crater School brings to mind the rigidity of Aubrey Upjohn’s Malvern House, the rowdiness of Stalky’s Coll, and the resourcefulness and sheer heart of St. Trinian’s. Brenchley had me at ‘British girl’s school on Mars’.” — Jennifer Stevenson

“If Angela Brazil and Edgar Rice Burroughs had decided to write a story together, Three Twins at the Crater School might have been the delightful result. Friendship, family ties–good and bad–and schoolgirl shenanigans set against the backdrop of a Mars straight out of early science fiction makes for exciting and yet cozy reading. I was especially intrigued by the hints of alternate history–the deathless Queen Victoria, a Great War fought between Britain and Czarist Russia–there’s much to explore here, and I sincerely hope there will be further installments.” — Marissa Doyle

“Who would have thought an English boarding school story and a science fiction adventure mashup would work so spectacularly? This is a one-sitting page-turner!” — Sherwood Smith

“In this inventive combination, Brenchley offers readers an entertaining opportunity to revisit the school stories and planetary romances of days gone by. Along the way, he interrogates the assumptions and attitudes of those books and their era with charming ruthlessness. Highly recommended.” — Juliet E. McKenna

“A rollicking good read from start to finish! Move over, Enid Blyton, there are new girls at school — and they fight monsters!” — Ellen Klages

“Twins we will never forget and cool Mars creatures.” — Miranda and Talia, age 9