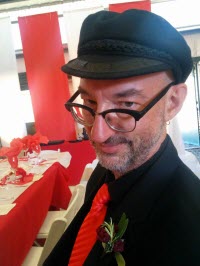 Chaz Brenchley spent his childhood in Oxford, one of four children. It was a rule of the household that he read everybody else’s books as well as his own; from his elder brother he acquired a love of science fiction, and from his sisters a devotion to the Chalet School books by Elinor M Brent-Dyer.

In his adolescence, he was sent to boarding school. Unhappily, it was almost exactly nothing at all like the Chalet School, nor the Crater School neither.

He sold his first stories at the age of eighteen, and has been a professional writer ever since. His work ranges from science fiction to epic and urban fantasy, from mysteries and thrillers to romance and horror. He’s published upwards of forty books, and many hundreds of short stories.

Nine years ago he moved from bachelordom to marriage, from Newcastle to California, along with 120 boxes (115 of which were books), two squabbling cats and a famous teddy bear.