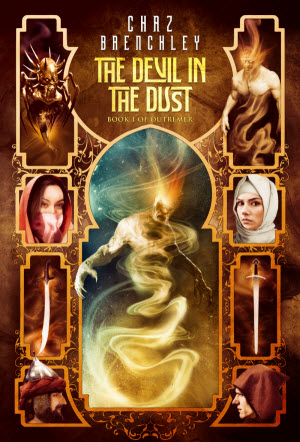 Outremer—a harsh and barren kingdom born of blood and at war with the world around it.

For forty years, the Order of the Knights Ransomer has been the sword-arm and conscience of the kingdom. Their stronghold, the Roq de Rançon, is the key to Outremer’s defence. But nomadic tribes on the kingdom’s borders threaten to reclaim this land that was once theirs.

Marron, a young man training to be a Ransomer, and Julianne, a noble-born girl betrothed to a man she’s never met, are journeying to the Roq. There each of them will be put to the test, as they become inextricably bound up in the coming upheaval that will decide the fate of Outremer.

Praise for The Devil in the Dust

“Along the way there are all the adventures a discerning fantasy reader could wish for and Brenchley’s concise, muscular prose makes the story flow, free of genre clichés” — SFX

“Brenchley’s grasp of his colourful narrative never falters, and his descriptive powers are exemplary.” — Orbit

“Chaz Brenchley’s striking new epic fantasy series [is] a revelation. The atmosphere is so well described you can almost taste it.” — Starburst

“Brenchley the horror novelist and Brenchley the fantasist come together in perfect alignment…the kind of dark, painful power rarely seen in the literature of heroic fantasy.” — Cemetery Dance

“If you like slow tension and intrigue and well-developed world-building, this is recommended. Brenchley’s prose is crisp and descriptive and his characterizations are nicely done. The last quarter of the book finally cuts loose and the ending left me wanting to see what will happen next in the second volume” — Sigma

“Brenchley has created a fascinating alternate-world version of the Crusader kingdom and has set up a bunch of interesting plot strands. The addition of Arabian Nights-style magic is a very clever touch that promises much to come.” — Emerald City

“As with all Brenchley’s novels, the prose is beautifully crafted and a joy to read…I can’t wait to see what happens next.” — Northern Review